Aptly named because of its golden-orange hue, Sunshine Veggie soup contains three of the highest foods in beta carotene: orange sweet potato, carrots & butternut squash (pumpkin). Beta carotene is of course the red-orange pigment found in fruits & vegetables. The body converts it into vitamin A (retinol) which is needed for healthy skin & mucus membranes, the immune system & good eye health & vision. It helps keep lungs healthy & is an antioxidant. This soup, regardless of its health properties, is warming, delicious & is one of the many hand-written recipes I found when my sister & I recently went through our father’s possessions after his passing in August.

For anyone who has had to rummage through someone’s belongings after their death you’ll understand what a sad, confronting task it is. The decision as to what to keep, give away or sadly, throw away, is a heavy responsibility that weighed on my sister & me. Our father, John, was a gourmand. Not only did he love to eat good food but was a remarkable cook. It was his passion. He would often take recipe notes of something I had cooked whether for him or me telling him over the phone what I’d made for dinner. Or take notes during a cooking show he was watching. Recipes in his neat, architect-style penmanship were slid throughout cookbooks, notepads, food magazines & random stacks of papers. This Sunshine Veggie Soup was one of them. Except it had no name…just a recipe hurriedly written with little in the way of instructions. Yet it sounded comforting, something I was seeking in my grief. So I made it. Not only did it taste wonderful but the colour of it was, as the name implies, like sunshine. Regardless of its health properties, served piping hot with some warm, buttered toast, I know John would have enjoyed it too. 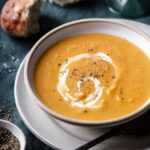 I’ve made variations of this soup with potatoes or cannellini beans; both work brilliantly to give the soup body and creaminess. Use which ever you prefer. Potatoes can cause a spike in a person’s blood sugar level – depressing I know. Cannellini beans give the soup a very similar texture to the potatoes without the added spike. If using beans, don’t drain them. This makes quite a lot of soup and can be frozen up to six months making it perfect for an easy lunch or those nights when you’re wanting something quick. The measurements given for the vegetables are the weight after peeling & chopping. Use vegetable broth if you’d prefer to make this vegetarian & either omit the cream or add a nut milk to make vegan.
Prep Time25 mins
Cook Time45 mins
Total Time1 hr 10 mins
Course: Soup
Servings: 6
Calories: 215kcal
Author: Lovoni