It’s rare I cook from someone else’s cookbook but I do love cookbooks as a source of inspiration. I don’t know about you but often I’ll buy a cookbook only to be disappointed. A couple of weeks ago I bought Donal Skehan’s new cookbook titled ‘Everyday Cook‘ (which is available in the US, UK, Australia and such) and was pleasantly surprised by how many recipes I want to try. And I have made a couple, including this Kung Pao Chicken and Eggplant recipe that quite frankly I could eat every week for the rest of my life and not tire of it. Donal hails from Ireland and after living in the US for a few years has recently moved back to Ireland. His Everyday Cook cookbook has been voted number one in Ireland. A well-deserved achievement. I love the bold flavors of this Kung Pao chicken recipe and although I swapped black peppercorns for the authentic Szechuan peppercorns, I’m sure no one will take offense.

Even those who aren’t a fan of eggplant will like this recipe: not only do the eggplants become buttery but they’re like sponges soaking up any flavors you throw at them – in this case it’s the salty, sweet, hot and sour flavors that make this recipe so delicious, including the eggplant. This recipe is vibrant and moreish; I had to use unfamiliar restrain not to have seconds. Another boldly flavored recipe you’ll have to try is Hoisin, Snow Pea and Water Chestnut Stir-Fry. Until next time beautiful people, toodles, Lovoni xo 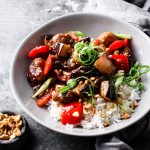 Bold on flavors, this easy and tasty Chinese-inspired recipe originally uses Szechuan peppercorns but as I didn’t have any and the Asian store is miles away, I used black peppercorns instead. Equally as delicious. As with any stir-fry, have all your ingredients prepped and ready before you start cooking. I chop the eggplant last so it doesn’t have time to brown.
Prep Time25 mins
Cook Time20 mins
Total Time45 mins
Course: Main Course
Cuisine: Chinese
Servings: 5
Calories: 361kcal
Author: Lovoni