If tabbouleh, Greek salad and fattoush had a love child, it would be this Mediterranean Summer Salad which I can’t really claim to be authentically Mediterranean in origin, but rather its ingredients are evocative of warm summer days or balmy nights under a sky littered with stars: cucumbers, tomatoes, capers, feta olives, roasted peppers, feta cheese, bulgur wheat and an array of fresh herbs, used as a salad green rather than an aromatic. All those ingredients speak to me of having a definite Mediterranean vibe.

The herbs are an integral part of the salad so don’t even think of leaving them out. You could switch out the dill for cilantro and switch the bulgur wheat for couscous. Unlike most salads, I think this Mediterranean Summer Salad is best if it’s left to sit in the fridge for a couple of hours before serving, allowing the flavors to become acquainted. And although I’m not a fan of leftover salad, this is also good the following day if you’ve leftovers. Chat to you soon, Lovoni xo 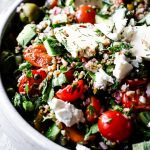 Enjoy this salad on its own or serve it with marinated and grilled chicken. There’s quite a bit of chopping for this salad but apart from cooking the bulgar wheat, there’s next to no cooking.
Prep Time25 mins
Cook Time10 mins
Total Time35 mins
Course: Salad
Servings: 4
Calories: 537kcal
Author: Lovoni

To make the dressing:

*You’ll need about 1/2 cup of uncooked bulgar wheat to make 1 cup of cooked. In a medium saucepan, bring 1 cup of water to a boil, add the wheat and stir. Cover and cook on low for 10 to 15 minutes until cooked; let cool before throwing into the salad.