Broccoli and Loaded Potato Soup – your favorite restaurant-style baked potato with cheese, bacon, sour cream and onion, in soup form. And with broccoli. Ladle this decadent and comforting soup into warm bowls to help chase away the winter chills.

When I first visited the US back in 1999, I was quite taken with the way the meals were served when eating out and so different to Australia. Salads were served first and ordering a steak with a baked potato promoted a server to come to the table with a rack housing small containers of sour cream, cheese, green onions, bacon, butter and cheese for my potato. Load me up with everything! This soup is a take on that with a nod to some sort of nutritional value in the form of broccoli. Potatoes of course are nutritional but I was going for a creamy, cozy soup that would satiate even the heartiest of salt and fat cravings. This certainly isn’t the recipe to be discussing nutritional values.

I know loaded baked potato soup isn’t anything groundbreaking but I like it so I thought it only right to include a recipe on my website. If you feel there’s still not enough carbs, feel free to add some crusty bread to dunking. Love, Lovoni xo

A few more soups to try: If you’re a creamy soup lover like me then try Curried Carrot and Lentil Soup. Maybe a chunky soup is more your thing which means you have to make this Hearty Ham & Lentil Soup. This Coconut Chicken Soup with Thai aromatics is one of my favorites. 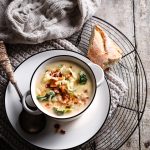