Actually, growing up it was always called “corn pudding”, not Corn Bake but here I am, living in America and thought corn bake would make more sense to people. Ridiculously easy to make, this recipe has been a family favorite since before I was born. If not before, then shortly after I came kicking and screaming into this world as I don’t remember a time in my life when it wasn’t being served at holiday celebrations or any time we had a barbie. And always on my birthday.

I offer no apologies for using canned corn in the recipe, even during the peak of corn season. Feel free to use fresh corn but you’ll have to cook it first then remove the kernels from the cob. Not to mention you’ve got to shuck the cobs first; all that mess. No, the beauty of this recipe lies in the ease in which it’s made – that requires a can opener. Often I don’t even bother with a bowl; I just bung everything into the baking dish, mix it up, clean the side of the dish and into the oven it goes. There are few simpler sides than this corn bake.

I’ve hesitated sharing this recipe because of its simplicity and it is a canned veg recipe – god forbid. But a food snob I’m not. Although some may disagree with that statement the fact I like plastic cheese on a grilled cheese sandwich should quell any doubts. Canned corn is perfectly fine. Please just don’t use the salt-reduced version – it’s crap. Canned corn kernels for me has always been the food I crave when I’m sick. It’s comfort food. This recipe, my intrepid friends, calls for corn kernels and creamed corn. Use both as stipulated in the recipe.

With a few humble ingredients, this is a cheap and cheerful side dish. It’s also the recipe I’ve shared more than any other. I come from a family of gourmands and most of us have a taste for the exotic, but all of us make this recipe at Christmas and when we’re entertaining with a backyard barbie. Perhaps it’s a bit of nostalgia. Maybe it’s its simplicity. Or could be it’s just because it’s good. Guess you’ll have to try it for yourself. Toodles, Lovoni xo 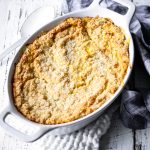 My family has served this corn bake – or corn pudding as I grew up calling it, with grilled meats, roasts and at every holiday season for as long as I can remember. Today it’s still one of my favorite side dishes. It’s ridiculously easy to make with only a handful of ingredients and one bowl. Use fresh sweet corn off the cob, canned or frozen corn. The recipe can easily be doubled or tripled for large crowds. It can be prepared a day ahead and left at room temperature for 30 minutes before baking but might take longer to cook than I’ve suggested. In some countries the can size may vary from 14oz (398ml/400ml), 14.5oz or 15oz – any of these sizes are perfectly fine to use.
Prep Time5 mins
Cook Time45 mins
Total Time50 mins
Course: Side Dish
Servings: 6
Calories: 174kcal
Author: Lovoni

*You can also use fresh corn for this recipe, it does involve another step first – you’ll have to cook the corn. To use fresh kernels: cook corn on the cob (boil, steam or microwave) until tender. Let cool enough to handle then stand the corn cobs on their ends and run a knife down to remove the kernels.