For clarification – what Americans call “cookies”, Australians call “biscuits”. As this is a quintessential Australian recipe, I’m referring to these as ANZAC biscuits. These buttery oat, coconut & golden syrup biscuits aren’t like other oat biscuits you’ve tried…unless you’re an Aussie. Then, like me, you’ve grown up enjoying mum or nana’s home-baked Anzacs.

The recipe is easy & with only a handful of ingredients is quick to make. Just make sure all your ingredients are fresh. So important. ANZAC biscuits are eggless, perfect for anyone in the family who has an allergy to eggs. What makes these so delicious is the golden syrup with its buttery, caramel-like flavor. Golden syrup is used extensively in puddings & baked goods in England, Australia & New Zealand. Golden syrup is available in some grocery stores here in the US & Canada, usually in the international section. Or try online – Amazon & The English Tea Store are a couple of places I usually buy it. The only brand I ever used is Lyle’s. Thick & amber colored, golden syrup is produced by refining sugar cane. There really is no substitute. Some recipes suggest corn syrup but just don’t – it doesn’t taste the same because it’s not the same. Buy it online if you can’t find it in your grocery store. Use it on toast, drizzled on oatmeal/porridge, on crumpets, in cakes. This Golden Syrup Anzac Cheesecake is a decadent & delicious recipe with golden syrup as the star.

I will obviously put all the pertinent information for making these ANZAC biscuits perfect in the recipe, but I wanted to show you what the mixture looks like rolled into balls before baking – holds together well & is glossy.

When baked, the biscuits will puff a little then deflate & become crispy with a little chewiness when they cool. They spread so don’t be tempted to crowd the baking sheet – been there, have the t-shirt.

My favorite way to enjoy them is with a cup of tea for dunking. Try to stop at one or two. You can’t. Well I can’t but we’ve already ascertained I have very little no self control.

There is a little conflicting information regarding the origin of the ANZAC biscuit. ANZAC stands for ‘Australia New Zealand Army Corps’ & I grew up understanding the biscuits were sent overseas to the troops during WWI because the biscuits kept well for travel. I like that story & I sent ANZAC biscuits to my step-son when he was stationed in Iraq so I’m holding to the story I grew up with because there is some documented evidence. Whatever the origin, these are my favorite biscuits. And this is a little salute to my homeland as Australia Day – January 26th, draws closer. Cheers, Lovoni 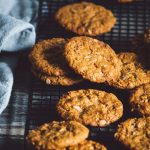 Buttery, golden syrup oat biscuits (cookies as they're called in the US) are Australian & New Zealand in origin but can be enjoyed world wide thanks to online shopping. This recipe can easily be doubled. Before you get started, smell the flour & the oats for freshness. This is important as if your flour is old or your oats have been lurking in the pantry for months you might want to buy some fresh.
Prep Time10 mins
Cook Time20 mins
cooling time15 mins
Total Time45 mins
Course: Baking
Cuisine: Australian
Keyword: anzac
Servings: 22
Calories: 100kcal
Author: Lovoni