White Chocolate Coffee Cheesecake – luscious, decadent & a perfect way to end a splendid meal. White chocolate, Kahlua, cream – well of course this is going to be good. This is a mix & set-in-the-fridge cheesecake, which is less daunting for people to make than its baked cousin. Make this a day or two ahead of serving & all that’s left to do is slather the top with billowy whipped cream & some chocolate covered coffee beans. Maybe some shavings of white chocolate if the mood takes you there.

It’s been such a long time since I’ve made a cheesecake that sets in the fridge as opposed to baking that I forgot how easy they are to make & how truly creamy & luxurious they are to eat. And rich. So rich. But it’s cheesecake, being rich & decadent shouldn’t come as a surprise.

I first developed this cheesecake recipe for a Christmas cookbook I wrote when I was living in Canada. It’s such a good recipe I still make it 16 or 17 years later. If you’re going to make one dessert this holiday season, make this – White Chocolate Coffee Cheesecake. It’s make-ahead – that always scores point in my world; you’ll be popular AF & you’ll get to eat a slice. Or if you’re greedy like me, maybe two slices. Try this Lemon Curd Cheesecake Bar recipe or Golden Syrup Cheesecake. 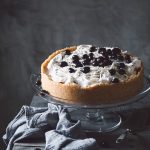 Using a coffee liqueur (Kahlua), white chocolate (Lindt) & good, strong coffee this decadent dessert can be made a day or two ahead or serving & is certain to be a hit. Remove the cream cheese a couple of hours ahead of time before making the cheesecake.
Prep Time20 mins
chilling8 hrs 30 mins
Total Time8 hrs 50 mins
Course: Dessert
Cuisine: American, Australian
Servings: 10
Author: Lovoni Walker

I’m Lovoni – nutritionist, recipe writer, food stylist & cookbook author. Basically, we all want the same things: to feel healthy & vibrant & to thrive. I can help you achieve these goals.