This decadent Golden Syrup Anzac Cheesecake with its Anzac biscuit inspired crust, creamy filling & buttery toffee drizzle has to be dessert for your next soiree.

Golden syrup is one of the best ingredients to use in baking. It has a deep, toffee-like flavor that no other ingredient resembles. Made from sugar cane it’s last in the molasses – treacle – golden syrup trilogy, being the most refined of the three. Harder to find in the US than Australia, I buy it on Amazon. There really is no substitute so don’t believe what you read online. Corn syrup doesn’t taste anything like golden syrup. It’s worth ordering a can or bottle. Or see if you have a grocery store that stocks it. It’ll probably be in the international section as it hails from England. Add it to homemade granola before you bake it, use it in place of honey or maple syrup. And like me, if you’re a crumpet lover there is nothing better than a golden syrup drizzle over a toasted, buttery crumpet.

Anzac biscuits – so quintessentially Aussie & Kiwi – are rolled oat, coconut, golden syrup cookies that have been associated with the ANZACS (Australia New Zealand Army Corps), soldiers who fought in WWI & Gallipoli. Although there’s much folklore surrounding Anzac biscuits what I do know is I love them & so does everyone I’ve made them for. I grew up with mum’s homemade Anzacs – a crisp, buttery cookie that has such a distinctive flavor thanks to the golden syrup. The crust for this cheesecake is made in a similar fashion to the Anzac biscuits – hence the recipe name. Oh & just to clarify – what North Americans call a ‘cookie’ Aussies call a ‘biscuit’.

I first saw this recipe in an email from an Aussie supermarket magazine. It’s a fairly straightforward recipe even for those who’ve never attempted cheesecake baking before: follow the recipe as I’ve stipulated & your cheesecake will turn out without a crack in it too. Let me know if you make it & if you need any suggestions for using golden syrup. Chat to you soon xo. 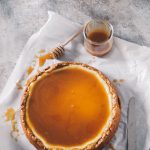 I’m Lovoni – nutritionist, recipe writer, food stylist & cookbook author. Basically, we all want the same things: to feel healthy & vibrant & to thrive. I can help you achieve these goals.