Big, succulent shrimp, green onions, garlic, crunchy celery, a little cilantro, soy sauce & a chili paste make this Asian-Inspired Shrimp Omelet (a main meal, served for lunch or dinner) something that’s not only light & comforting but a cinch to make.

I love these Cantonese-style omelets. More free-formed than the omelet pictured – the Chinese make their omelets in a wok, I opted for a small, non-stick pan so the omelet resembles more a frittata in looks than a folded omelet most of us are familiar with.

The shrimp are the stars. The other ingredients are merely there to enhance their flavor & to add texture. Not one who likes cooked celery in stir-fries, I love the celery in this omelet; it adds a crunch, often missing in egg meals – I’m all about texture.

Once cooked, the omelet is drizzled with a little oyster sauce – a necessary ingredient for a more authentic Chinese taste. Oyster sauce is used extensively in Chinese – especially Cantonese, cooking. If you’ve eaten Chinese food you’ve eaten oyster sauce many times but not realized. So don’t despair if you’re not an oyster fan: if you didn’t know what sauce it was, you’d never have guessed.

I suspect omelets – or egg foo young as they’re called here in the US, aren’t traditional Chinese fair but does it really matter? What matters is they’re easy to make, inexpensive & you can throw almost any veg or protein into one – making an Asian omelet a wonderful recipe for the-day-before-grocery- shopping, as you can grab whatever bits & pieces you have for veg lurking in the fridge. And if you don’t have shrimp then make it veg or add bacon. Simple. 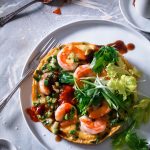